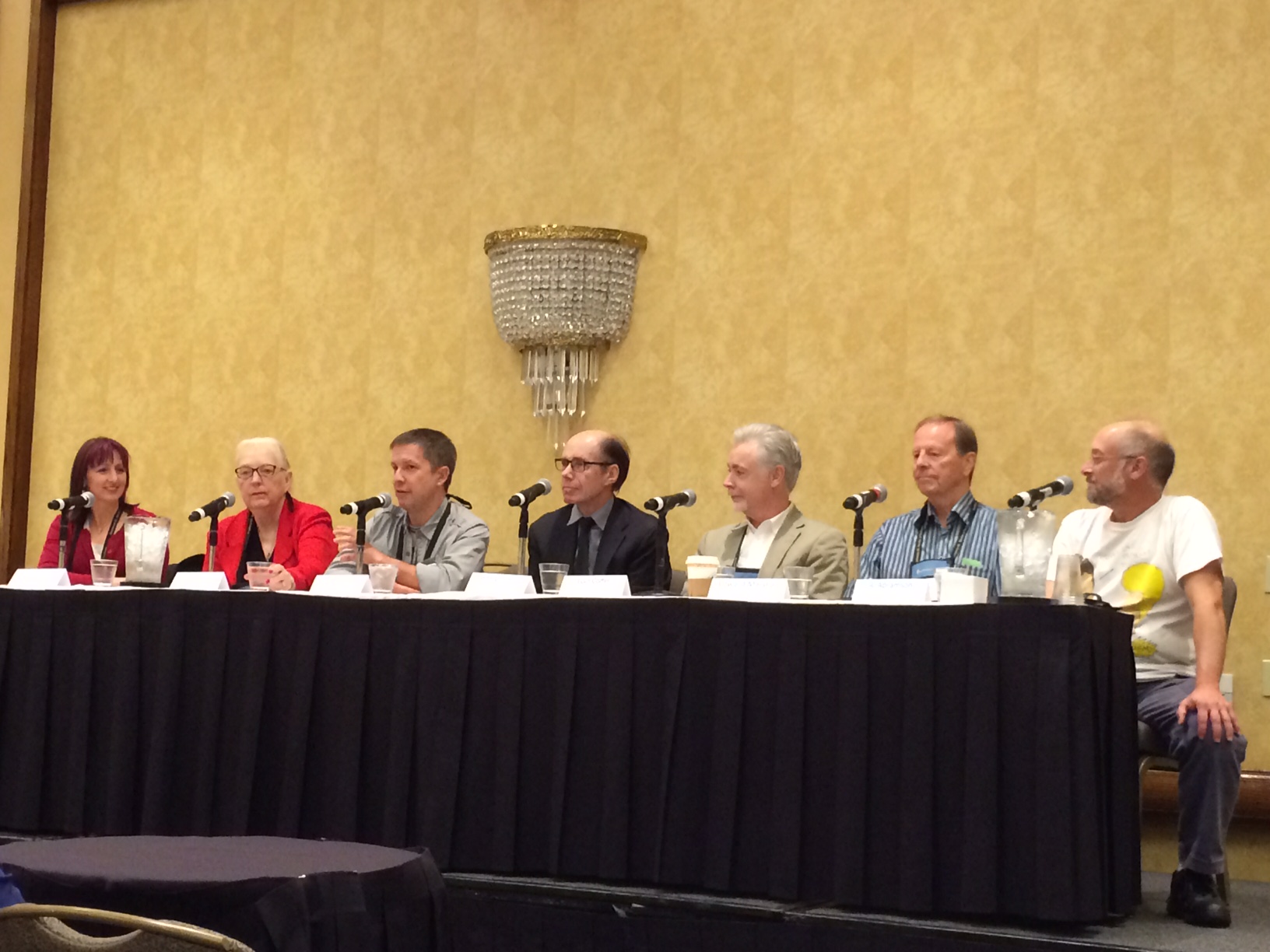 I just spent 4 crazy, wonderful days at Bouchercon, the annual conference for crime authors and fans named for Anthony Boucher.  Boucher helped found the Mystery Writers of America, was a noted mystery reviewer for the NYT and author of several mysteries – my favorite title is The Case of the Seven Sneezes – gotta look that one up!  This was my first time at the conference and I have to say it was inspiring beyond my expectations.  It’s a true community.  The photo above is from the closing panel that featured a terrific moderator whose name I failed to note, J.A. Jance, Simon Wood, Jeffery Deaver, Eoin Colfer, another very well known author, and a famous fan – I’m kicking myself for recycling my program before I got their names down.  Anyone out there who went, please let me know who they are!  Talk ranged from the serious to a running joke about colonoscopies.  Eoin started it – he named one of his children’s book’s characters Colin Oscopy.  Right up my alley, no pun intended.

Here are a few of the comments I picked up from the many incredible panels:

Jeffery Deaver paces books like concert pieces – not too many vivace’s (briskly played passages) together, for example.  He told a hilarious story about the time he offered to sign his own books in a book store. The clerk, not content to compare Deaver with the photo on the book jacket, asked for identification.  Deaver couldn’t resist asking if people impersonating authors was a big problem.  The clerk’s answer:  “You ‘d be surprised.”

Eoin Colfer:  “Holding my new book in my hands is like Gollum with the ring.”

On a more serious note, high action thriller author David Morrell, who lost two members of his family to the same rare – not hereditary – disease was asked if these tragedies affected his writing:  “I continue writing because I live vicariously through my son and granddaughter.”

In answer to the question, what would you tell your younger self when it comes to your writing, Sara Paretsky says “I’d take more risks,” Charlaine Harris says “I’d be braver,” and Sue Grafton – who is on W in her alphabet series with three books to go – says, “Take more vitamins!”

And here are some new book recommendations I picked up:

The Mystery of the Yellow Room by Gaston Leroux – one of the first locked room mysteries – he also wrote Phantom of the Opera!

Too Bad to Die: A Novel by Francine Mathews – historical fiction featuring Ian Fleming, who in real life set up and attended meetings with Roosevelt and Churchill – on pre-order now

The Cottoncrest Curse by Michael H. Rubin – historical thriller ranging from the Civil War to the Civil Rights era

I came home with loads of new books to read, the list too long to mention here.

Last, here is a photograph of some of the people who attended Speed Dating, where about 50 of us debut authors got to introduce our books to potential readers.  It was incredibly special to have the opportunity to meet so many people who love the crime genre. 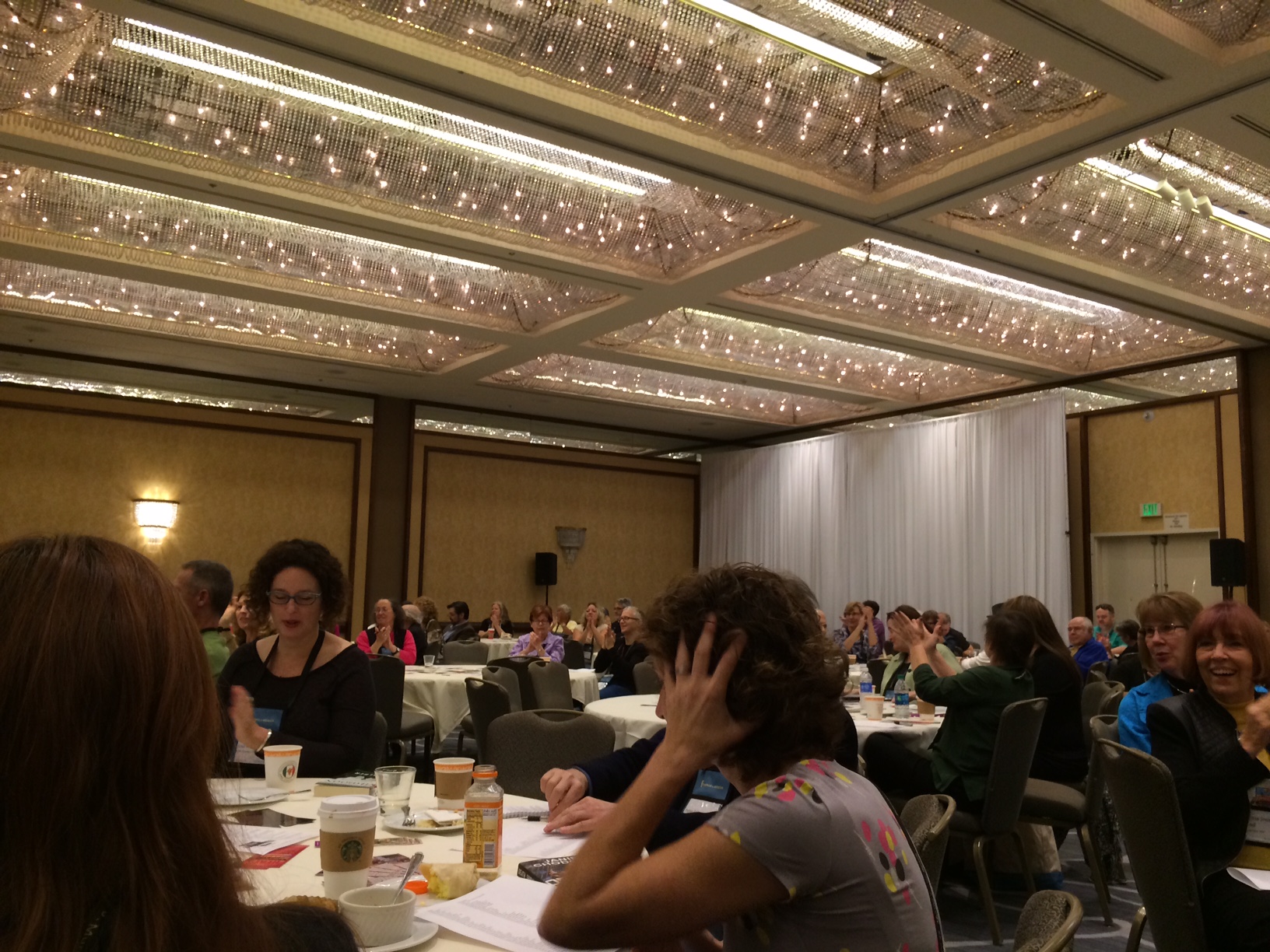 If you love crime novels – anything from cozies to thrillers – consider coming to Bouchercon next year.  It will be held in Raleigh, NC October 8-11.

If you attended this year let’s connect!  Let me know how I can help you with your careers, if you’re an author.  And if you’d like some further reading recommendations, sign up for my email list and you can access a PDF of 13 Female Sleuths Behaving Badly – 13 of my favorite mystery-solving heroines from books, television and film.  That’s one panel I’d love to see!  What would you like to see next time around?  Love to hear.