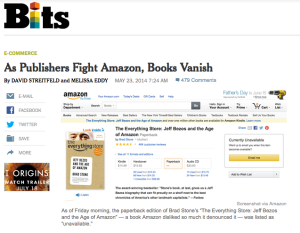 am so disappointed to read about Amazon’s latest tactics – delaying shipments, raising prices, removing “buy” buttons, marking books as “unavailable” –  making it harder and sometimes impossible for us to buy books from publishers they are punishing as they negotiate for better terms.  See the New York Times article for all the sordid, sad details.

I’m normally an Amazon fan.  I like everything they have done to make more books available to more people, more ways, more often.  I like the fact that they are (normally) consumer-focused.  I like my Amazon Prime membership.  I used it to buy potting soil once, so basically Amazon sent me dirt.  I think ordering a Robert Parker mystery for my Kindle and having it delivered to me on a beach in Thailand, in seconds, is a minor miracle.

It’s understandable that as the publishing industry becomes more competitive, even if overall readership is increasing, there will be skirmishes over who gets what.  In an industry undergoing massive reinvention, as this one is, there will be winners and losers, and anyone who reads Clay Christensen’s work on disruptive innovation understands that the winners are the companies who innovate.  This tends to be the smaller newcomers, and Amazon earned and deserves their market share because they offered improvements that customers valued and would pay for.  Traditional publishers and book retailers failed to respond to their customers, and failed to stay relevant in the face of change.  But that doesn’t mean Amazon does everything right.

Amazon is making several mistakes, in my opinion:

1.  They don’t seem to care about the people who make their book business possible:  these people are known, quaintly, as authors and readers.  When Amazon holds authors’ books hostage over negotiations with publishers, their authors and customers also take the hit. What happened to delivering a great customer experience?

2.  They don’t seem to care that this looks bad for them.  Amazon has done this before:  in 2010 they removed the “buy” buttons from Macmillan titles while they negotiated better terms.  Let’s say they had good reason to play hardball with traditional publishers.  But they haven’t made the case to explain why they felt they had to go to the lengths they did to get the deals that they claim are best for customers in the long run.  They have a PR problem which is not going to go away.  And it’s going to result in a loss of goodwill among the very customers they want to serve.

3.  They don’t seem to realize that they are no longer a start-up, scrabbling for market share and survival.  Amazon now has a place at the publishing table, if they’re not sitting at the head of it.  Generally when you become a market leader, you step into the role of “category manager”, and look beyond your own corporate interests to the interests of the larger community.  What is Amazon doing to take a leadership role in keeping the publishing industry economically viable for all who contribute meaningfully to it?  I’m not talking about protecting out of date institutions or business models.  I’m thinking of the people, authors and readers in particular, because without the storytellers and audiences nothing else is possible.  But it applies to all those who edit, proofread, design book covers, and format manuscripts; and to the marketers, publishers and retailers who help stories find audiences and audiences find stories.  If Amazon, as a market leader, succeeds in negotiating deals that drive book sales down so far that these people can’t make a reasonable living, the only people left who can afford to participate in this industry will be the ones who don’t need to work.  I suspect that will lead to less diversity in terms of what types of books get written and sold.

4.  What I do think they realize is that they won’t be leaders in book retailing forever.  Amazon is strategically getting into other aspects of the business, particularly as it comes to locking up new content.  The only thing that will remain true about the publishing industry of the future is that it will always need storytellers and audiences.  Everything else will continue to change.  And when technology eventually enables writers to publish their own stories and find their own audiences without the help of agents, publishers or retailers – this is already possible today, it’s just very inefficient – people won’t forget how Amazon treated them.  Amazon will lose authors, customers and market share faster than they would do otherwise.

We love it when David takes down Goliath.  But when David becomes Goliath, we stop rooting for him.

I’m sure you’ll find plenty to add to this discussion.  You may disagree, and that’s fine.  I would love to hear from you.  And I would love to see you take action in whatever way you feel comfortable.  Please share this with your social networks and let’s start a conversation.